by Margerie | Inspirations of the now 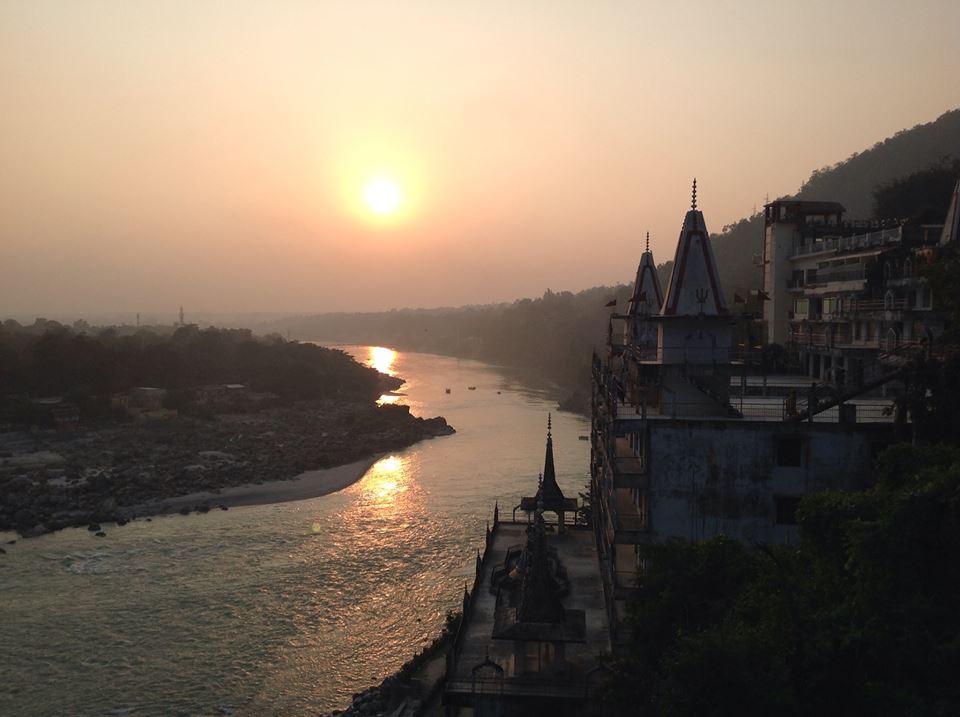 After several years of practicing yoga (and somewhat unhappy to be a lawyer), I felt the need to deepen, to explore, to escape… After some more or less far-fetched decisions for my entourage, I finally booked a one-way trip to India!

I had no other plan but to start with a month of immersion in an ashram in Rishikesh, to begin to train myself as a yoga teacher. My research (thorough, I’m rather a maximizer;)) had focused on a certified 200h Yoga Alliance training, in order to obtain an internationally recognized degree. They guided me to the Anand Prakash Ashram.

I had chosen this place before my departure, without any recommendation other than that of my intuition. I wanted to go to the mountains rather than to Kerala, to the North rather than to the South of India. The call of the Himalayas and the Ganga River pushed me towards Rishikesh, home of the first yogis. The traditional and modern character of the Akhanda yoga offered at Anand Prakash Ashram had attracted me. The fact that the program was guided by an Indian yogi (Vishva-ji) and a Canadian yogini had ended up convincing me of the potential quality of the experience that was being offered to a Western woman like me.

I suspected that in a month I will not learn all there is to know about yoga, but I did not imagine that such an adventure could have a real impact on so many other aspects of my life… 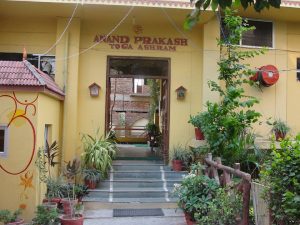 So, it is in September 2014 that I arrived at the ashram Anand Prakash, a beautiful yellow building on the heights of the city of Rishikesh. After a joyful and colorful arriving ceremony, I met my roommate, a smiling German doctor of my age. We would therefore share this spacious and rudimentary room with the essentials, a separate shower room and shared balcony. The other 40 participants (many more women than men, of all ages and nationalities) spread over the three floors, by 2 or 3.

The following day, we adopted the ashram schedules and the training began: 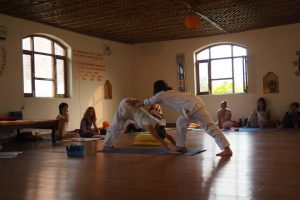 A very steady rhythm, the Sunday afternoon being free nonetheless. Most of our days were spent at the ashram and its beautiful and large practice room. The terrace facing the first wooded hills of the Himalayas (less than 1000 meters there, we speak of hill) also allowed to breathe, meditate or exchange in small groups during the breaks.

For 40 days, we studied many postures of Hatha Raja and Kundalini yoga, but also of prenatal yoga, restorative yoga and chair yoga, mantras, breaths and kryias, themes and fundamental texts of philosophy, pedagogy and Teaching, anatomy, structure of a course … in short, everything you have to learn in a YTT Yoga Alliance.

Rich and dense, while remaining accessible, the courses were of quality, whether given by Vishva-ji or other professors of his team (in English of course). 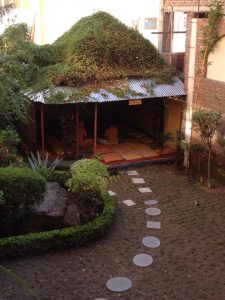 Each morning, the fire pooja – a fire ritual where mantras are sung while offering different spices to the flames – worked like small purifications. A spiritual experience that I almost never missed though it was optional. Day after day, Vishva Ji, our host and master, gave us an experience in the oldest lineage of yogis.

The meals were also a real joy for my taste buds! Yes they are a lot lots of lentils, rice grains and chapatis. But cooked in so many different ways that it would have taken me much more than a month to be saturated. I even had the chance to spend some time in the kitchen to learn some dishes, including the famous banana samosas!

There were also Yogis yum yums, small sweets sold by a yogi residing in the ashram, for the benefit of disadvantaged children. Based on dates, cashew nuts, coconuts and other local delicacies, I confess that these wonders had the gift of comforting the most fragile of us, because stress is not absent there either, the timing can sometimes feel tight, especially when we sometimes lived intense emotionally days …

But the experience was above all HUMAN. Because we step out of our comfort zone: we get up early, we eat sitting on the ground, we often walk without shoes (I love!) … while in parallel physically stirring a lot of things on the carpet, also putting into perspective a lot of ideas, stories, samskaras, all of that in community … it creates links all the stronger that we all tried to put into practice the philosophy of life that was taught to us well beyond the asanas.

If I remember only one thing from what I learned during this training, it is to listen. 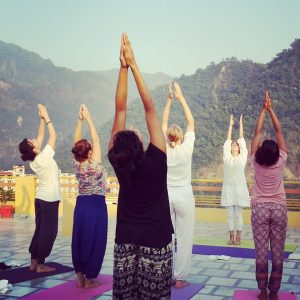 I really became aware of the importance of listening, and the difficulty that I sometimes also have to practice it in an authentic way. It is truly a quality that I have endeavored to develop since then (and am infinitely grateful to all the “teachers” I have met on my way since!).

I chose this place because I liked the approach that was proposed: a holistic yoga, which takes into account the integrality of the person, integrating asana, pranayama, meditation, mantras, kriyas, philosophy, anatomy, lifestyle, ethics and Ayurveda. On leaving, I felt ready to teach in this line (which I did) but tirelessly curious to learn even more (what I continue to do)!

I also discovered the yogi of the smile. His mantra?

“Your self is playful, fearless and blissful”

This still resonates in me from time to time, for my greatest good!

Inhale … … exhale with a smile ! Yoga can be as simple as that 😉

Did you take that training as well? Another equally recommendable training? Feel free to share your experiences!